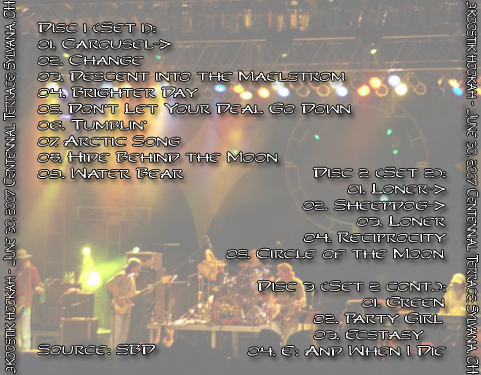 Removed several glitches and static patches during Carousel, Tumblin' and Water Bear, although there are still remnants in a few places that, had they been removed, would have taken away from the integrity of the recording.

Terrible singing...I think Obama's social programs are designed for people like this....

What are these guys going to do for a living when they cant' haul their equipment around? LMAO

CLOG THE IA WITH MEDIOCRITY!

Reviewer: DEADHEADekoostikhippie - favoritefavoritefavoritefavoritefavorite - February 17, 2008
Subject: glad i made this one...
WOW!! i was there this nite, and i knew it was really amazing from start to finish..i mean i coulndt stop movin my feet the whole time, since the first measure of music that cariied a beat. The band was on...like always, and i'm really amazed the sound produced out of the terrace. Makes this just an amazing listen...i believe this is my 3rd time now, not including the nite.
peace and love to all!

Reviewer: HookahHeadForever - favoritefavoritefavoritefavoritefavorite - July 31, 2007
Subject: mmmCrispy
This is one of the best hookah shows on the archive, and I would know. All of these crispy soundboards from dubba are entirely nasty, check out Mr. Small's on 420. Trade freely and support EH!! Fall Hookahville is going to be sick-DSO & EH!

Reviewer: mattylop - favoritefavoritefavoritefavoritefavorite - July 9, 2007
Subject: thanx dubba.
im the guy who posted the previous review about the sound quality of some of the hookah shows on here. I had a feeling you'd come through. it's nice to be able to blast hookah on a good sounding stereo with a show like this. thank you again!